After launching its first savings products, FINCA Malawi launched its first ever savings promotion dubbed FINCA ‘Nkhawa Njee’ promotion. This is part of its continued efforts to reward customers for trusting FINCA and its services since its inception.

With an aim of increasing awareness about the FINCA savings product and improving savings mobilization, the FINCA Nkhawa Njee promotion was launched at FINCA Limited Head office on 14th July 2017. The promotion involves savings branches and runs until 14th October when the grand draw will be done and the top winner per participating branch will walk away with a deep freezer. Speaking during the launch, Violet Mangani, Marketing Manager for FINCA Malawi emphasized “we want to build the capacity of our customers who have been previously limited to credit products”. 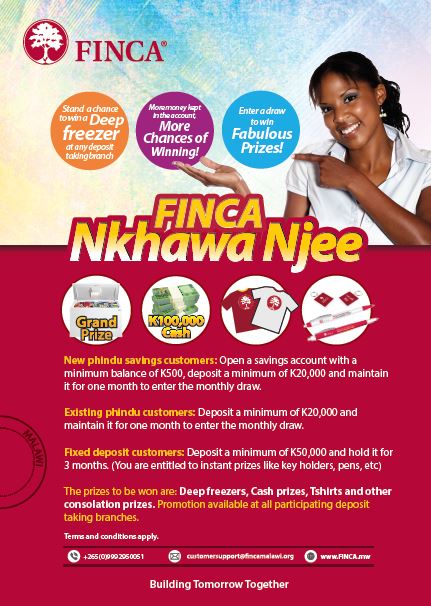 Items that can be won in the FINCA Nkhawa Njee Promotion

To participate in the FINCA Nkhawa Njee promotion, customers have to open a FINCA Phindu Savings Account with as low as K500, deposit and keep a minimum of K20,000 for one month to enter into the monthly draw and stand a chance to win K100,000 monthly prize. Furthermore, one has to keep the money in the account for three months to enter into the grand draw and stand a chance to walk away with the grand prize of a deep freezer per participating branch and other consolation prizes such as t-shirts, key holders and pens. The more money one holds in the account, the more chances of winning in the promotion.

Why be left out? Join the FINCA Nkhawa Njee promotion today and stand a chance of acquiring assets including a state of the art deep freezer.